The year is almost over! How ridiculous is that? Here are another month of favourites for you! 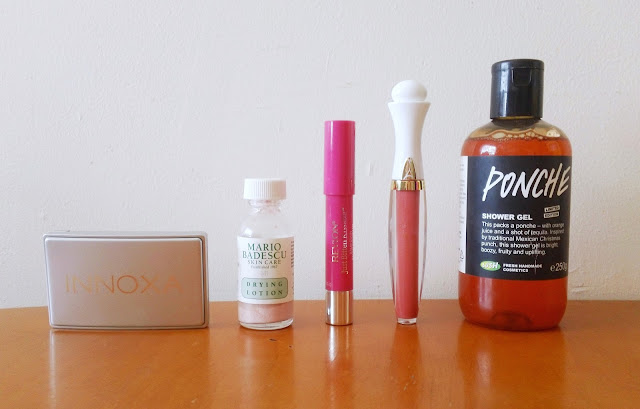 Innoxa Naturally Nude Eye Shadow Quad - This is such a great little eye shadow quad. I don't want to spoil you on the colours because I have written a full review that will be up early next week ;D

Mario Badescu Drying Lotion - You know when you get a huge, painful pimple that makes you want to kill youself? You need this little spot treatment. This isn't as effective on small spots but for large spots it really dries them out so that they aren't as unbearable. I would recommend!

Revlon Just Kissable Balm Stain in Sweetheart - This is a product that truly delivers. The stain from this balm lasts on and on and on and it is such an easy product to throw in your bag and reapply throughout the day. However I have tried out some of the lighter colours and I was not as impressed with the staying power, so do keep that in mind.

Mirenesse Velvet Lip Lift Moisture Shine in 47 - It is a combination of two things, the smell and the opacity of this lipgloss that make it a winner in my books. This product is meant to be a lip plumper but I have noticed no such effects on my lips at least. But as a lip gloss that applies like a liquid lipstick and smells of cookies and cream I love it! I am very interested in trying more lip products from Mirenesse now!

Lush Ponche Shower Gel - This is such a lovely shower gel in the morning. It smells kind of like mandarins and tequila and fruity deliciousness. This is Christmas item so snap it up now while you can!

I am also going to start including some non beauty favourites in these posts from now on!

My favourite TV show this month has been The Office. I know I am so late getting on this train but this show is so funny. I would recommend checking out at least the first season if you haven't seen it yet. Also leave me a comment telling me who is your favourite character if you watch it! I love Jim but my boyfriend likes Michael the most.

In terms of music I have been still really enjoying The Presets new album, particularly this song.

I have also been playing a whole load of Playstation All Stars Battle Royale this month. It's a really fun brawler game featuring much loved characters from the Playstation franchise. It's essentially the Smash Bro's of Playstation, but the play style is quite different. You beat the crap out of one another to build meter which in turn gives you 3 levels of super attacks that kill the other players. As someone who grew up with Playstation I have been loving this game this month and I would highly recommend it. Oh and I have been playing as this guy. Ten points if you know who he is.